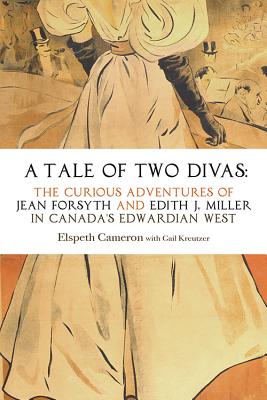 A Tale of Two Divas: The Curious Adventures of Jean Forsyth and Edith J. Miller in Canada's Edwardian West

Book is in excellent condition. Binding is solid and square, covers have sharp corners, exterior shows no blemishes, text/interior is clean and free of marking of any kind. 250 pages, b&w photos.

A Tale of Two Divas tells the story of two Canadian singers who began as soloists in church choirs, but eventually moved on to spectacular careers. Soprano Jean Forsyth and contralto Edith Miller knew each other well. They met when nineteen-year-old Edith studied vocal music with Jean, almost twenty-five years her senior, in Winnipeg in 1894. After that their paths crisscrossed. This tale of two voices contrasts the ways in which Jean and Edith achieved success. Edith Miller's path was clear and committed. An only child from Portage la Prairie when there were only about 700 citizens, she forged through to the very top in England, singing in the Proms, at the Festival of Empire to celebrate the coronation of King George V in 1911, and at Covent Garden before marrying a baronet. Jean Forsyth never married and was drawn to many other interests. What might have been a vocal success story like Edith's was diluted by the compassion for animals that led her to the founding of the Winnipeg Humane Society, her support of various charities, her dabblings as a actress, her journalism, her utter dedication to the many vocal students she launched on careers of their own, and her fulsome enjoyment of many social events.

Title: A Tale of Two Divas: The Curious Adventures of Jean Forsyth and Edith J. Miller in Canada's Edwardian West

A Tale of Two Divas: The Curious Adventures of Jean Forsyth and Edith J. Miller in Canada's Edwardian West