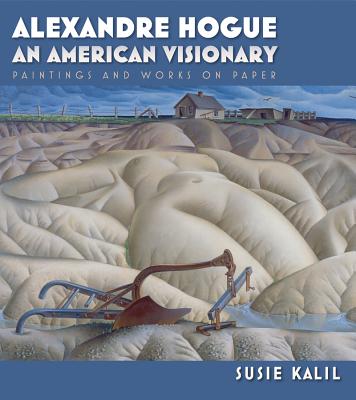 Ex-library book with the usual stamps, stickers, etc. Binding is solid and text/interior is clean and free of marking of any kind. Front end paper has corner cut out. Book shows very little wear and dust jacket is wrapped in protective cover by library. Text/interior shows no wear and is very clean. 207 pages with large, full-color prints throughout. Chapters include: The early years, Taos and back to Texas, The dust bowl era, The early forties, Toward an intuitive geometry, The mon shot series, The big Bend paintings, Drawing: the dynamic impulse, the late works, etc.

Presenting the unique vision of an American original . . .

Alexandre Hogue, a renowned artist whose career spanned from the 1920s to his death in 1994, inherited the view of an America that imagined itself as filled with limitless potential for improvement, that considered high art and great ideas accessible to ordinary working people, and that saw no reason for an intellectual chasm between a learned elite and the masses. He always viewed himself as a radical, yet his passion stemmed from a deeply conservative idea: that art, culture, and nature should form a central force in the life of every human being.

His well-known Dust Bowl series labeled him as a regionalist painter, but Hogue never accepted that identity. His work reveals the spirit of Texas and the Southwest as he experienced it for nearly a century. In his later years Hogue worked in forms of crisply rendered nonobjective and calligraphic one-liner paintings. Bringing to light new information regarding the Erosion and Oil Industry series, this book gives special attention to lesser known, post-1945 works, in addition to the awe-inspiring Moon Shot and final Big Bend series.

Each series--from the hauntingly beautiful Taos landscapes and prophetic canvases of a dust-covered Southwest to his depictions of the fierce geological phenomena of the Big Bend--serves as a paean to the awesomeness of nature.

Houston-based curator and critic Susie Kalil grew close to Hogue from 1986 to 1994, a time during which she interviewed him, considered his oeuvre with him, and came to share his vision of the nature and purposes of art. In Alexandre Hogue she reveals Hogue as he presented himself and his work to her.