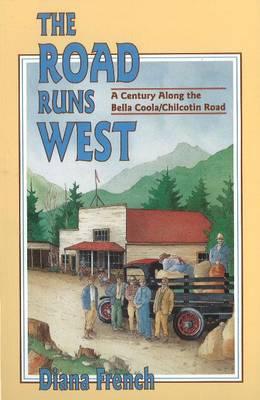 The Road Runs West: A Century Along the Bella Bella / Chilcotin Highway

This is the unusual story of a very unusual road: the 456-km Chilcotin Highway, which runs from Williams Lake to Bella Coola and is known as the 'loneliest road in BC." The highway took ninety years to build through some of the roughest terrain in Canada. Its history is served up here with plenty of photos and lots of anecdotes about the people who built the highway and the people who needed it.

It all started during the Cariboo Gold Rush of the 1860s, when a Victoria promoter named Alfred Waddington dreamed of building a road from the Pacific up over the Coast Mountains and clear across the Chilcotin Plateau to the gold fields. Waddington's dream ended up a nightmare as road builders sparked the only instance of armed resistance by First Nations people in BC history. But as settlers entered Chilcotin Country from the east, the road tagged along behind. It was a do-it-yourself project, built by the settlers themselves, innocent of surveys and engineers. But it worked, sort of. The road was death to vehicles and a terror to travellers, but it got you where you wanted to go as long as you didn't care when you arrived.

Meanwhile, at Bella Coola, where people had been promised a road to the outside for years, they took matters into their own hands and blasted their way across the mountains to Anahim. Lake. It took ninety years, but in 1953 the two roads joined and the Chilcotin Highway was a reality. Even today parts of the road remain unpaved. There isn't one supermarket or fast food store or all-night gas station. And the notorious "Big Hill," which drops out of the mountains down to the Bella Coola Valley, is still a perilous, heart-stopping descent.

Title: The Road Runs West: A Century Along the Bella Bella / Chilcotin Highway

The Road Runs West: A Century Along the Bella Bella / Chilcotin Highway